All she ever wanted…

Jess Henderson is trying hard to balance her nursing job with being a mother to Woody, her two-year-old nephew. So hard, in fact, that gorgeous doctor Alex Fitzwilliam has his work cut out to convince her that there is room in her life for romance.

But he does, and their relationship is sparkling and passionate until Alex finds out that loving Jess also means loving a child. Alex refuses to confront his feelings over the loss of his own son, and Jess can’t risk Woody being hurt again. But when Woody is taken ill, Alex is finally able to put his feelings aside to save the little boy’s life. It is only then they realize that what they both want more than anything is to be a family.

To the wonderful Heroes in my Life: Norm, Sandon and Barton. Thank you for your love, your support and your faith that this work would one day be a book.

Why I Wrote The Book

The newspapers are full of stories that spark off my writing ideas and an article about children in Africa got me thinking. Families in Africa deal with death everyday but here in Australia, the death of a child is a lot less common. But it does happen and how does someone cope after such a tragedy? How is their life altered and how does the tragedy affect their life choices? That idea set me off on another trajectory…what if a woman had a child but had been badly hurt by a partner. How does that affect her ability to trust again? Does it affect how she raises her child? And what if these two people meet and have an undeniable chemistry? How do they traverse such an emotional minefield? This is Jess and Alex's story. 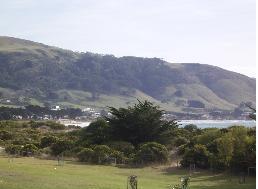 This story takes place in Roseport, a fictitious town set on the Great Ocean Road of southern Australia. Ringed by rainforest and the thundering southern ocean, the people of Roseport provide a warm and friendly backdrop to Jess and Alex's journey. This book had two working titles...in 1997 it was 'Healing Hearts.' In 2005 it was 'For the Love of a Child.' I hope you enjoy reading The Nurse's Longed-For Family.

For more information about The Great Ocean Road click here. 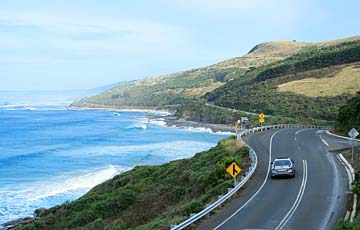 Jess Henderson gave a final wave, as Doctor David Parkinson's four-wheel-drive turned the corner. A selfish sadness tightened in a circle around her heart as the vehicle and the great family inside it, disappeared from view.

She faced three months without the warm and loving presence of the family she'd come to love. David and Erica had given her a job as their practice nurse at the Community Health Centre when her sister's death had forced her to come to Roseport two short months ago. But more than a job, they'd welcomed her, and helped her adjust to her new role as a mother to her nephew, Woody.

She sighed. Three months without their support.

Three months working with a doctor she'd only met half an hour ago. A doctor who didn't look comfortable in his new surroundings. In fact, he didn't look happy at all.
He looked to be a totally different personality from David. But first impressions could be wrong. During their brief introductions she got the gut feeling he didn't really want to be in Roseport. He seemed distant and a bit aloof. The sooner she got to know him, the better she would feel. And if that involved making polite conversation, then so be it.

She took a quick sideways glance at Doctor Alexander Fitzwilliam. The man David called Alex. He looked out of place in the seaside town wearing an impeccable designer suit. At six foot one, he towered over her. Usually her five foot four inches felt tall enough, but not today. His presence seemed to dwarf her and she was very aware of him.

His dark, tailored suit accentuated his broad shoulders and the jacket fell open to reveal a flat, taut stomach. Pleated trousers clung to narrow hips, emphasising his long legs. The soft material teasingly hinted at what lay underneath.

Jess fleetingly wondered what he would look like in Roseport's signature dress code of shorts. Or in a wet suit, slick with water. Her breath caught in her throat.

She risked a quick glance upward, tilting her chin to see his face. His red hair, streaked with blond tips, seemed to be more in keeping with Roseport's relaxed sea-change lifestyle. It hit his collar giving him a boyish look at odds with his citified air. His clear turquoise-green eyes matched the colour of Roseport bay, and right now they were staring straight at her.

A flush of heat travelled through her, surprising her. She squashed it immediately. She had no time in her life for an attraction to a locum doctor. Men wouldn't be interested in her anyway now she had a child. Besides, she was flat out learning how to be a mother to twenty-two month-old Woody.

'So they've gone and we're here.' He looked down at Jess and gave her a tight, half smile.

'Yes, doctor, so it seems.' Arrgh, how tongue-tied and inane could she possibly sound? But something about Dr. Fitzwilliam made her feel gauche.

'Call me Alex. Everyone does except my mother when I've upset her, and then I get Alexander.' He grinned at the thought. The tension so evident on his face since arriving this morning slid away, and a dimple appeared in his cheek.

Jess's breath caught again. When he relaxed he was drop-dead gorgeous. Get a grip, girl. 'Right, Alex it is. Unless of course you leave the treatment room in a pigsty, then I might join your mum in calling you Alexander.'

He laughed. 'I'll bear that in mind.' He put his hands in his pockets. 'So I guess you should show me the ropes, where things are kept, stuff like that. David did dump this on me at extremely short notice so I'm glad you've been here a while.'

'Actually, I've only been in Roseport a couple of months myself.'

Surprise crossed his face. 'Typical David. Always dashing off to far-flung, third world places at a moment's notice, assuming the people at home will man the fort. Well, I guess we'll muddle through together.' This time his smile was a full smile involving his eyes, which darkened slightly to sea-emerald green.

His smile did the strangest thing to her. It was like warm sunlight beaming into the dark corners of her soul. A place that had been so bereft of light recently, since her sister's death.

And Robert's betrayal. Jess, I don't want an instant family, and I'm not fathering someone else's kid.

Jess squashed Robert's chilling voice and concentrated on talking to Alex. Jess gave into her curiosity. Besides, this was part of the getting-to-know you process. 'So you and David know each other pretty well?'
He nodded. 'We met at med school as idealistic wannabee doctors. David has a habit of pulling everyone along with his plans.' Warmth infused his words.

Jess laughed and relaxed. Her first impression of a reserved and uptight doctor was fading, along with her apprehension about working with him. 'I know what you mean. His enthusiasm is infectious. So you've been friends ever since?'

'We have. After our intern year we travelled the world together.'

'Backpacking?' Jess fondly recalled her own adventures in Europe.

'We did a bit of that but mostly David had us working in remote villages. We worked hard and played hard. I guess we grew into men together.'

Sandy's suit spoke of a city practice at odds with what he'd just described. 'What sort of medicine are you currently working in?'

'Insurance.' A slight line of tension stiffened his jaw.

Astonishment filled Jess. Insurance medicine was general check-ups, giving second opinions for claims. It was dry and dull and involved no real patient care. It was the total opposite of the sort of medicine David practiced. 'So you're no longer dashing off to far-flung places?'

'No.' The word came out harsh and abrupt, cutting the conversation off completely.

Jess felt like she'd been hit by an arctic blast. The deep tension lines reappeared on his face and his stance became rigid. It was as if he'd hung up a DO NOT ENTER sign and created a "no-go" force field.
All her earlier apprehension returned in a rush. So much for making polite conversation. They'd hardly started and he'd shutdown as tight as a drum. Just great. David had left her with a prickly, moody doctor. It was going to be a long three months.

The familiar tightening gripped Alex's chest. Hell! One innocent question from David's practice nurse and his emotions unravelled. He saw the surprise and shock on her face at his harsh "NO." He should explain but right now he couldn't go there.

Too hard. Far too hard.

And what could he really say? Words didn't help. His son was dead and time didn't heal.

But Jess had only been trying to be friendly. Jess with the large chocolate-brown eyes that crinkled with laughter. Jess whose stray strands of chestnut hair caressed her face in the sea-breeze, making his fingers itch to tuck them back behind her ears and feel the softness of her skin.

And her crazy dress code of bright coloured over-alls that suited a clown more than a nurse. She had no right to look so sweet and sexy all at the same time, stirring up feelings he'd buried two years ago.

Damn David for rushing off to the Pacific like that. Pulling him in to run the practice at a moment's notice. He should have said no. He should have stayed in Melbourne doing the mind-numbing but safe medical insurance work he'd done for the past two years.

But David was like a brother and no was never an option.

However, David had never mentioned Jess. His last practice nurse had been fifty and a grandmother. Alex hadn't been able to hide his surprise when David had introduced them. The wariness on her heart-shaped face had told him she'd seen it.

And he'd seen her sadness when the Parkinsons had left.

So neither of them was happy. It was going to be a long three months.

From "THE NURSE'S LONGED-FOR FAMILY" by Fiona Lowe
Mills and Boon Medical Romance September 2006
ISBN: 0906-026384756 Copyright: © 2005 Fiona Lowe
® and ™ are trademarks of the publisher. The edition published by arrangement with Harlequin Books S.A.
For more romance information surf to: http://www.millsandboon.com.au